Below is a compilation of most commonly asked questions and information we discuss with new clients.

Please call or email us for more information. 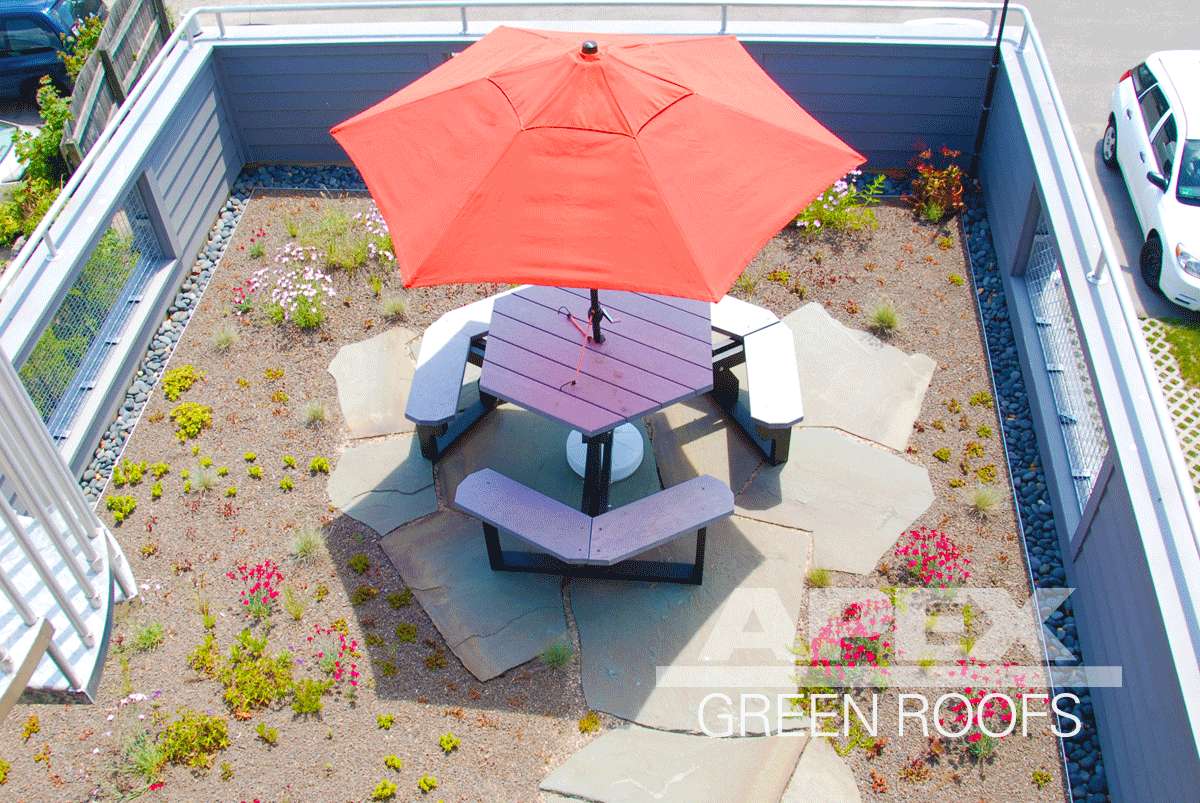 WHAT ARE THE FIRST STEPS IN STARTING THE PROCESS OF HAVING A GREEN ROOF INSTALLED ON MY BUILDING?

EXISTING COMMERCIAL and RESIDENTIAL BUILDINGS: Knowing the total dead load, pitch, and waterproofing membrane of an existing roof structure is key for Apex Green Roofs to determine the best options for design and build-up of a green roof system. Once you are able to specify these key variables – you can begin the discussion of green roof system, installation cost and overall benefits.

DEAD LOAD CAPACITY: Determine how much weight the existing roof can support. This information can usually be found in architectural drawings or blue prints or hire a structural engineer to assist you. We can sometimes recommend a reputable structural engineer depending on the building location.

As a general rule of thumb, our lightest and thinnest green roof system weighs 15lbs per sf saturated weight with a minimum 2.5″ soil depth. Therefore, your roof must be able to support at least this much weight.

PITCH: If the roof surface is not flat, determine the exact pitch. This information can usually be found in architectural drawings or blue prints or hire a structural engineer to assist you. We can sometimes recommend a reputable structural engineer depending on the building location.

NEW CONSTRUCTION COMMERCIAL and RESIDENTIAL BUILDINGS: If a green roof is part of a new construction project – Apex Green Roofs can work from the blueprints/architectural drawings to determine the best vegetated roof installation system based on the roof plan.

Apex Green Roofs Inc. is a design/build green roof installation firm – well versed in the design phase of construction projects. Our experience can be of great benefit when included earlier in the design process: helping to avoid flaws that impede green roof success.

WHAT ARE THE STRUCTURAL REQUIREMENTS OF MY BUILDING IN ORDER TO HAVE A GREEN ROOF INSTALLED SUCCESSFULLY?

As a general rule of thumb, our lightest and thinnest green roof system weighs 15lbs per sf saturated weight with a minimum 2.5″ soil depth. Therefore, your roof must be able to support at least this much weight.

HOW MUCH DOES A GREEN ROOF COST?

Depending on the conditions of the roof, the total surface area, and the type of green roof system to be installed:

Intensive system can cost $30 to $100+ depending on the ultimate depth of the installation: 12”+ growing media supporting sedum, perennials, herbs, shrubs, trees

WHAT IS MY RETURN ON INVESTMENT IN A GREEN ROOF?

While the installation of a green roof requires a larger initial investment up front than a typical non-vegetated roof, a green roof will last 3-4 times longer than a typical roof (an estimated 60-80 years). This is because the vegetation protects the surface of the roof membrane from exposure to UV rays and weather conditions (primarily rain and ice). Sun and rain break down the surface of the roof much more rapidly when the surface is exposed.

In addition, green roofs can reduce your heating and cooling energy costs – sometimes 50% or more. The best energy savings tend to occur on the largest buildings, but even small residential buildings will see some energy savings.

“According to a University of Michigan study from 2006, the benefits of green roofs run beyond environmental improvement. In the long run, they can actually save money compared to a traditional roof. According to the study, a green roof will cost around $464,000 ($556,561 in 2016 dollars), and $335,000 for a conventional roof ($401,827 in 2016 dollars). However, over the life of the green roof it is estimated that it will save around $200,000 ($239,897 in 2016 dollars) in energy costs. That is because green roofs absorb much of the heat from the sun, causing the rooftop to be about 80 degrees cooler than a traditional rooftop. The green roof also can insulate the building itself so that less heat goes to waste in the winter. According to the EPA the Chicago City Hall Green Roof saves approximately $3,600 in heating and cooling costs annually.”

In some cities and towns, grants and subsidies exist which can help fund the installation of a green roof. Tax incentives for installing a green roof exist in some parts of the country as well. Incentives are most prevalent in the area of storm water management; green roofs can absorb between 20% and 100% of precipitation in summer therefore reducing strain on wastewater drainage systems and pollution caused by storm water runoff into streams, rivers and harbors.

Check with your local government to see if this is an option for you. Learn more about current green roof incentives available from municipal, state, regional and/or federal agencies from Green Roofs for Healthy Cities on greenroofs.org in Policy Resources.

DO I NEED IRRIGATION ON MY GREEN ROOF?

NO: if implementing an extensive green roof system that is a functional solution for environmental challenges like storm water management, reduction of heat island effect, and preserving the life of the roof membrane. An extensive green roof system utilizes hardy sedum species (or stone crop plants) which are re native to coastal, alpine, and desert climates – therefore better suited to changing and harsh weather conditions found on roof tops.

YES: if implementing a semi-intensive or an intensive green roof system deep enough to support herbaceous plant varieties. These systems, often called roof gardens, may require periodic irrigation – dependent on the plant material. We can provide irrigation installation if required.

ARE NATIVE OR NON-NATIVE SPECIES GROWN ON A GREEN ROOF?

Herbaceous native plants tend to require irrigation to survive. In some installations, native species can thrive if given the correct conditions and proper care.

CAN A PITCHED ROOF SUPPORT A GREEN ROOF SYSTEM?

Yes – the maximum pitch for a roof without the use of slope retention materials is 2:12.

A green roof can be installed on almost any roof pitch. Installation costs directly increase with the pitch of the roof simply because more materials are needed to support the vegetation, and these roofs may require more initial maintenance while the plants establish themselves.

WHAT HAPPENS IF I HAVE A LEAK ON MY ROOF?

EFVM (Electric Field Vector Mapping) testing is one method of testing we use in order to find the source of the leak quickly and efficiently.

In this method of leak detection, an electric current triangulates where the leak is to within a foot of the source of the leak. As part of your warranty with Apex Green Roofs, if you have a leak, we will conduct EFVM testing in order to find the source and we will then patch your roof membrane and repair any damage to the living roof system that may have occurred due to the required repair work.

Some roof systems are not EFVM compatible, and therefore require a more manual leak detection process. Therefore, warranties for non-EFVM compatible roofs can be slightly more expensive than those which are EFVM compatible.

WHAT TYPE OF WATERPROOFING SHOULD I HAVE ON MY ROOF SURFACE BEFORE INSTALLING A GREEN ROOF SYSTEM?

We recommend waterproofing systems that are compatible with EFVM (Electric Field Vector Mapping) testing, including TPO, PVC, and liquid plastics.

Some roof systems like EPDM, are not compatible with Electric Field Vector Mapping, and asphalt can be easily eaten away by plant roots.

WHAT KIND OF WARRANTY PLAN DOES YOUR COMPANY PROVIDE?

Apex Green Roofs offers a full 10 year warranty on plant materials and green roof components. Should a leak exists at any point, we will help source and repair the leak using EFVM (Electric Field Vector Mapping).

Roofs that are not EFVM compatible can still be covered by warranty, however, this warranty may cost more due to the manual leak detection process certain roofs may require.

In addition, we include 2 years of maintenance with all of our contracts. While a green roof is generally very low maintenance, it is important to check that the plants are establishing themselves well, and much of this process occurs within the first two years.

HOW DOES LEGISLATION INCENTIVIZE A GREEN ROOF FOR A HOMEOWNER, DEVELOPER OR BUILDING OWNER?

If you are interested in local incentives for green roofs call your local Bureau of Environmental Services as a starting point. Municipal, state and federal legislation promote vegetated roofs through these types of incentives:

TAX INCENTIVES: Tax credits or abatements can be applied to a tax bill based on a specific dollar amount per square foot of vegetated roof space.

DENSITY AND ZONING BONUS: Municipalities are granting additional space allowances to developers and owners who implement design solutions that lessen the negative environmental impact of an occupancy.

FAST TRACKED PERMITTING: Streamlining the permitting process for building, plan and site permits for developers. This type of incentive is mainly based on LEED Certification.

LOANS: Zero to low-interest loans are available in some locations to install green roofs on residential, commercial and industrial buildings.

GREEN BUILDING RATINGS: Administered by the U.S. Green Building Council (USGBC), Leadership in Energy and Environmental Design or LEED Certification is required or awarded by many U.S. federal agencies, state and local governments. A green roof installation can earn up to 19 LEED points.

Learn more about the benefits of green roofs on our FAQ page.

See our Resources page for helpful links to FLL and ASTM Standards for green roofs.